The Astonishing Life of Octavian Nothing, Traitor to the Nation, Vol. 1: The Pox Party by M.T. Anderson 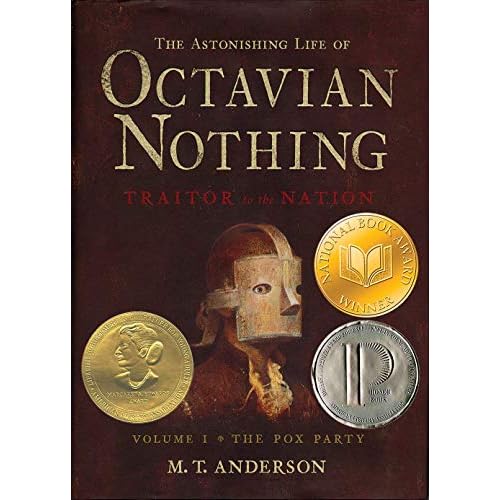 The plot focuses on Octavian, a young black boy who recounts his youth in a household of scientists and philosophers (The Novanglian College of Lucidity). The Collegians believe so thoroughly in the Age of Reason's principles that they address one another as numbers. Octavian soon learns that he and his mother are objects of one of the Collegians' experiments to learn whether Africans are "a separate and distinct species." Octavian receives an education "equal to any of the princes in ," until financial strains shatter Octavian's sheltered life of intellectual pursuits and the illusion that he is a free member of a utopian society. As political unrest in the colonies grows, Octavian experiences the increasing horrors of what it means to be a slave.

The story's scope is immense, in both its technical challenges and underlying intellectual and moral questions--perhaps too immense to be contained in a traditional narrative (and, indeed, has already promised a second volume to continue the story). As in Meg Rosoff's Printz Award Book How I Live Now (2004), in which a large black circle replaces text to represent the indescribable, 's novel substitutes visuals for words. Several pages show furious black quill-pen cross-hatchings, through which only a few words are visible, perhaps indicating that even with his scholarly vocabulary, Octavian can't find words to describe the vast evil that he has witnessed. Likewise, employs multiple viewpoints and formats--letters, newspaper clippings, scientific papers--pick up the story that Octavian is periodically unable to tell.

Once acclimated to the novel's style, readers will marvel at 's ability to maintain this high-wire act of elegant, archaic language and shifting voices, and they will appreciate the satiric scenes that gleefully lampoon the Collegians' more buffoonish experiments. 's impressive historical research fixes the imagined College firmly within the facts of our country's own troubled history. The fluctuations between satire and somber realism, gothic fantasy and factual history will jar and disturb readers, creating a mood that echoes Octavian's unsettled time as well as our own.

's book is both chaotic and highly accomplished, and, like Aidan Chambers' recent This Is All (2006), it demands rereading. Teens need not understand all the historical and literary allusions to connect with Octavian's torment or to debate the novel's questions, present in our country's founding documents, which move into today's urgent arguments about intellectual life; individual action; the influence of power and money, racism and privilege; and what patriotism, freedom, and citizenship mean. Gillian Engberg Copyright © American Library Association. All rights reserved.

Classroom Implications: This is a good pick for a high level, 8th grade historical fiction book club. This novel can be read through a critical lens, with students working to determining power, privilege and positioning of characters within the novel and the setting.

C & T 4140
This is a working annotated bibliographic list of children's and young adult books. It is intended for this list to grow as my exposure to new texts expands. A note about organization: Each book has several "tags" attached to it. This design accomodates different search purposes and is a way to purposefully peruse the list.